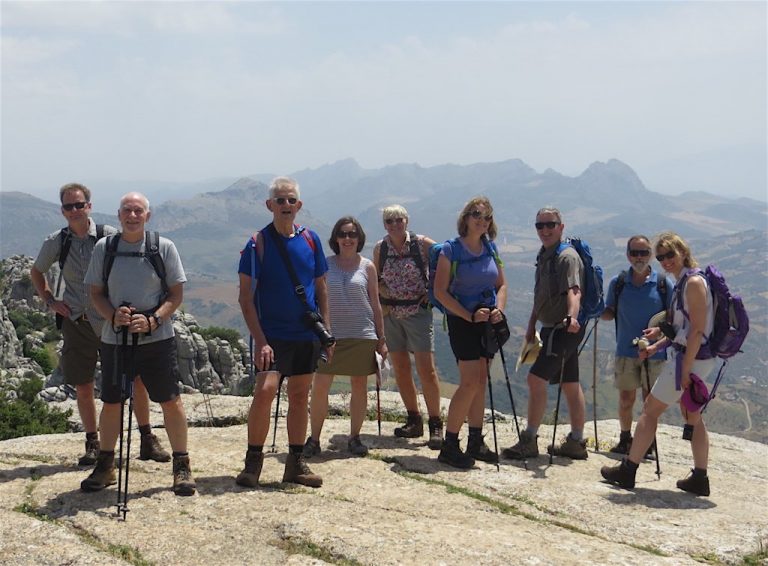 Our Rail & Hike adventures include visits to some of the finest historical towns and cities in Andalucia together with some wonderful daily walks and hikes in the most impressive natural parks of southern Spain. Travel between locations is by train through varying and often dramatic scenery. The rail journeys are comfortable and relaxed in ultra modern and sometimes high-speed trains. What better way can there be for people who walk to get the very best out of Andalucia.

This unique 7 night Rail & Hike journey starts in Granada and includes a visit to the Alhambra Palaces. From Granada you head east to Antequera and visit Córdoba by high speed train. Then south to Ronda, another jewel from the Moorish occupation of Spain. We then head back east through the ‘lakes of Andalucia’ and the chance to walk the Caminito del Rey. Voted by Lonely Planet as one of the ‘must do’ walks in the world. Our Rail & Hike adventure ends in the historic centre of Malaga, one of the less  proclaimed but equally interesting ‘great cities’ of Andalucia. On route, we stay in carefully chosen accommodation and eat in excellent local restaurants. We rate the daily walks as Level 1 & 2 dependent on the amount of travel and cultural interest in the day. It is possible to opt out of any of the daily walks but few choose to do so.

Day 1  Arrival in Granada
The starting point for the holiday is Granada where we stay for one night in the historic centre of this world renowned city (see notes on travel).  The location is perfectly situated for our visit to the Alhambra Palaces which we may visit in the early evening or the following morning. In the evening we may follow our gastronomic Ruta de las tapas in the old town or stroll to the Realejo for dinner.
Day 2 – Granada and the Alhambra Palaces
The Alhambra Palace was one of the greatest architectural wonders of the world when created in the 13th &14th centuries. It remains so today and is one of Europe’s premier tourist destinations. Our favourite (and less busy) time to visit is the early evening of  Day 1. This leaves more time for our city walk on Day 2 and there is so much to experience. Our walk takes us to the cave houses of Sacromonte with visits to some of the lesser known ‘gems of Granada’ on  the way. On the walk back to Plaza San Nicolas the views across to the mountains and the Alhambra are just stunning. We may have a late lunch here before descending through the Moorish quarter of the the Albaicin on route to the station for the late afternoon train to Antequera. Walking time. Up to 4 Hours
Day 3 – Antequera and El Torcal
Antequera is almost undiscovered by tour groups but has an astonishing amount of monuments, all dominated by a Moorish castle. In the distance, the 4,000 ft. high karstic plateau of El Torcal can be seen and is the main reason for our visit. It is difficult to believe that the whole area was under the sea one hundred million years ago. Since then it has been sculptured by nature into the most incredible display of rock formations, the background for our truly ‘once in a lifetime’ walk. We have a choice of routes  to get the very best out of our visit to this truly remakable location. We stay for two nights in the historic centre of the town. Walking time up to 5 Hours
Day 4 – Córdoba and the Mezquita
The 120 km journey from Antequera to Cordoba takes just 31 minutes on the AVE high speed train. In the 10th and 11th centuries the city was the most powerful and influential in Europe. During this time the Mezquita was completed and is now regarded as the largest, most glorious mosque in the Western World. It is one of the most visited monuments in Spain and declared a World Heritage site in 1984. The historic city centre received a similar declaration in 1994 and together they form the inredients for our memorable city walk. We leave the Córdoba on the afternoon fast train for Ronda where stay for two nights. Walking time up to 4 Hours
Day 5 – Rest Day in Ronda
So much to see in the town plus an optional  country walk Our small charismatic hotel is in the historic centre of Ronda close to the famous bullring. The town is the the most well known of all the pueblos blancos famed for it’s spectacular gorge and bridge. A great location for a rest day but we also offer a guided morning walk into the Serrania de Ronda countryside from the north of the town. It is easy walking with great views across to the Sierras de Grazalema and return to the town with a stiff climb and spectacular views of the bridge from below. After lunch, time for some independent sight seeing or join our town walk taking in some of the best historical sites in Ronda and maybe a visit to the Palace of the Moorish king and descent into the secret mine. Walking time up to 4 Hours
Day 6 – Ronda to the ‘lakes’ of Andalucia
After breakfast we leave Ronda by road for the Parque Natural de Guadalhorce and Teba where we stay for one night. Our delightful hotel is in a peaceful location between the lakes and perfectly situated for our walk along the Caminito del Rey to El Chorro the following day. After the transfer from Ronda, we offer a pleasant walk though the pine covered hills with great views up to the Necropolis of Alguilliras. These ancient buriel tombs date back to 2500 BC well before the formation of the lakes less than 100 years ago. Walking time Up to 4 Hours
Day 7 – El Chorro and the Caminito del Rey
Spanish Steps researched this famous walk 20 years ago and found it unsuitable for our purpose! It subsequently became known as ‘the scariest walkway in the world’ and was closed a few years later. After huge expense the Caminito del Rey has now been made super safe and re-opened, allowing access to one of Spain’s most spectacular walking trails. The walk is now suitable for all but the most faint hearted but we also offer an alternative walk for those unlikely to enjoy the experience. Both walks end in El Chorro in time for lunch. We then board the train for Malaga and walk to our hotel at the foot of the Alcazaba in the historic centre of the city. Walking time around 3 Hours
Day 8 – The Alcazaba in Malaga
Although it’s history dates back for almost 3,000 years Malaga is now best-known as the gateway to the Costa de Sol. Most of the annual 13 million visitors head straight for the beaches – all the better for those who come to enjoy this atmospheric, unspoilt and underrated city. For almost 700 years it was the major port for trade between the two continents of al Andalus. What better place for us to end our own ‘Rail & Hike’ journey. Some guests may choose to spend an extra night in Malaga or continue their travels in Spain before returning hom

You will stay in small hotels and pensions, all with comfortable en-suite rooms and locations chosen to complement a Rail & Hike adventure. The first night is spent in Granada close to the Alhambra Palaces. The next two nights are spent in Antequera in the centre of this ancient & historic town. The 4th & 5th nights are spent in Ronda, most likely  in the Hermanos Macias close to the famous bull ring. This hotel is very popular with Spanish travellers including the visiting toreros. The 6th night is spent close to the northern access to the Caminito del Rey, most likely in the  Posada del Conde. The final night is spent in Malaga, most likely in the  Hotel Carlos V at the foot of the Alcazaba.

Flights are not included allowing guests to travel from their most convenient local airport, or meet up in Spain. The meeting point for the holiday is in Granada where we stay for one night.  There are a few direct flights into Granada airport but many more into Malaga. If you choose to fly into Malaga, there is a direct and inexpensive coach service to Granada but you will need to arrive on an early flight if you wish to transfer on the same day (See below*).
The holiday ends in Malaga where we stay for one night. From Malaga centre there are frequent and convenient shuttle services to the airport and also to the train and bus stations for onward travel in Spain.
*If you have the time available, we do recommend travelling a day before the start of the walking holiday and staying an extra night in Granada  (or Malaga if you arrive there on a late flight). There is so much for us to see and we may visit the Alhambra in the evening of the first day.

“We wanted to thank you for a truly memorable tour of Andalucia. We thought the combination of walks, tours, hotels, restaurants was perfect – just what we needed. All with a delightful bunch of companions too! We are very keen on another trip with you guys for when we return to Europe next May – we will get in touch soon when we have an idea of dates and which tour. In the meantime thank you again for all your hard work in making our Spanish trip such a wonderful experience. Martin & Liz (Australia) Sept 2019

“Just a quick not to say thank you so very much for a superb holiday through Andalucia, I loved the variety of the places we visited —El Torcal was right up my street, so peaceful and quiet, very interesting stone formations. Then the“piece de resistance”, the Caminito del Rey, was fab, loved it, although I was a little anxious about doing it not brilliant on heights, but I did and it was fascinating. Very interested in joining you for the trip to Marrakesh. Jane (Northants) Sept 2019

“Thank you for opening our eyes to Andalucia. It truly is a unique, relaxed atmosphere and I fell in love with the area. Loved your relaxed manner in hosting us around – plenty of time to explore, always knew where to be and when but never felt rushed, plus be good food or a drink was never far away. Linda and Ian (Cambs)
June 2018